This post was originally published on Security Debrief, a blog on homeland and national security founded by Chris Battle, who passed in 2013 after a long fight with kidney cancer.

Chris Battle founded Security Debrief as a forum for homeland-specific conversations with the genuine intent of advancing the national effort. It’s a concept he embraced while standing up the Department of Homeland Security (DHS) and then as Public Affairs Director and ultimately Chief of Staff at Immigration and Customs Enforcement.

So when we talk about how tightknit the homeland security community is today, we are in part talking about Chris.

Chris died in 2013 from kidney cancer. He was 45. It devastated everything—his family, his career, his hopes for the future. Chris fought bravely for several years, but there were not enough treatments to save him.

And that sure sounds familiar. Those who work in security know that we are always vulnerable, but it is only in the face of a terrorist attack, for example, that the broader public suddenly appreciates the extreme threat that exists at all times, in all places. Chris’ story delivers a related lesson: cancer and other maladies can come for us at any time. It is only through our ignorance that we live without a daily fear—until we see one of our own attacked.

Facing this kind of threat, the homeland security community assuredly takes a proactive view. There’s risk of a low-probability/high-impact event? Let’s mitigate that.

I agree, and I know someone with a plan to do it: Dena Battle.

Dena was Chris’ wife, and she and three other people impacted by kidney cancer have just launched KCCure, a nonprofit dedicated to raising funds for kidney cancer researchers who are working to find a cure. About 60,000 Americans are diagnosed every year. While Chris hated to talk about averages and “timelines” in cancer prognosis, it’s a brutal fact that with each progression of the disease, the survival rate plummets. And as the cancer grows, the treatment options shrink. 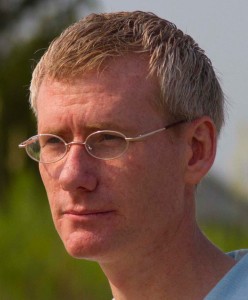 Kidney Cancer is notoriously resistant to conventional treatments like chemotherapy and radiation. Worse still, kidney cancer lacks consistent funding streams for the doctors and other scientists who do the research and conduct the early trials that are vital for discovering new treatments. Nothing gets out of the lab.

Imagine the current DHS without all the tools and investments that make it possible. Imagine fighting a war and guarding a nation with weapons that rarely work. That’s what Chris went up against. It’s what tens of thousands of our countrymen and women with kidney cancer face every day. And to me, when thousands of American lives are at stake, that’s a homeland security mission. This is our mission, and we owe it to our fallen comrade to pick up the fight where he left off. We can do this by supporting KCCure.

If you know more than a few people in your line of work, give a nod to Chris. And please visit KCCure and make a donation in memory of Chris and in support of the thousands of people fighting kidney cancer. Ours is a small community, but as in the homeland mission, so with kidney cancer: our collective effort can vastly exceed our number. Unlike terrorism and natural disasters, however, this is a fight we can win for good; it’s a threat that can be ended.

Justin Hienz is the editor for Security Debrief, the owner of Cogent Writing, LLC, a subject matter expert on violent extremism with the University of Southern California Safe Communities Institute, and a member of the board for KCCure.